Happy Thursday! We are almost to the weekend! Yay!!

This week has been a little crazy but actually most consistent and less surprised crazy than previous weeks. I still managed a little me time in all the craziness and part of that included making homemade brownies!

I decided to give making made from scratch brownies a shot. I had never done so and it looked pretty straight forward. Guys, let me just tell you, it was super simple. I will not be buying boxed brownies anymore lol. It takes about the same amount of work as making boxed brownies and I already had everything in the house already. No need to go to the store!

While it may be super simple, I still managed to mess it up a bit. They taste delicious, don’t get me wrong! However, I did not cook them long enough….

I snagged the recipe from Lindsay over at Life, Love, and Sugar. The recipe was super easy to follow so I highly recommend checking it out on her blog! You can see the recipe here.

Here is my attempt: 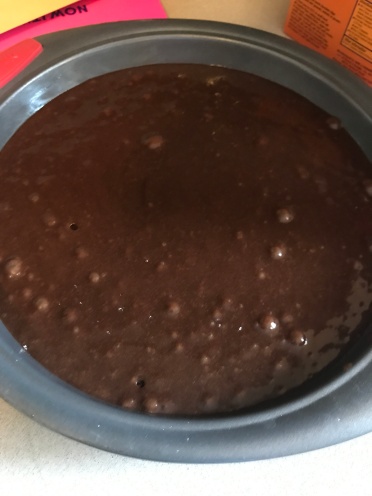 I got everything mixed together here and it is looking yummy! The batter definitely tasted delicious!

I can’t say I’m the cleanest when it comes to making food… the kitchen usually looks like a disaster zone for a bit when I am done.

As you can see, it doesn’t look the prettiest. It eventually deflated. I need to bake it longer next time.

A little crumbly, a little gooey but super delicious either way! Goes perfect with a glass of milk! Yum yum yum!