I got a new cookbook this week! It was kind of a splurge or investment if you will. I don’t usually buy cookbooks. I have a stack of them that I have gotten as gifts and I love them! I especially love the ones my mom made for me! But I usually end up finding stuff on pinterest and whatnot. This one is a cookbook that a friend of mine has. He always makes some of the best pastries and breads. I knew I had to have this book. The book is called Tartine by Elisabeth M. Prueitt and Chad Robertson, the owners of the Tartine bakery in San Francisco. I got the book and have already made two of the recipes out of it. I made Buttermilk Scones and Fruit Gaelettes. Both were supremely delicious and a huge success with friends!

The Scones recipe had them doing fruit but I had some chocolate chips I wanted to use. It turned out just as good. (Although, I think I will be doing raspberry scones tomorrow.) 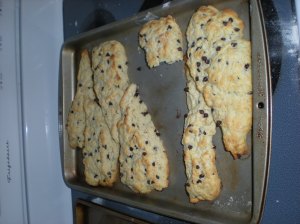 I made them a little big but oh well! I think tomorrow I will cut the raspberry ones into littler squares.

Then I made the Fruit Gaelettes for dinner with some friends last night. 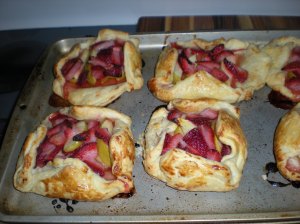 Oh man! They were so yummy! The strawberries were the freshest I have had since living in Fresno, California. They were amazing! So I made a Strawberry Apple Gaelette. The flavors were perfect together! A friend that was there last night, had no idea I made them and was going on about how we should hire the friend who originally had this book to make pastries for our hypothetical shop we want to open. He then was informed I made them. Lol. Best compliment ever! Being compared to someone who makes deliciousness! Yes!